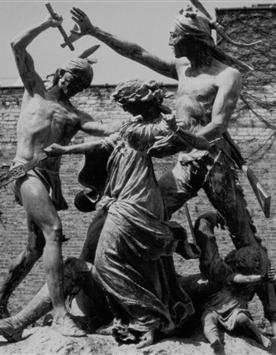 Chekagou, which actually translates to "wild onion", was actually the original name for the city of Chicago.  The city actually appeared on maps back in 1684, when Tonti and LaSalle passed through this region while traveling to the Mississippi.  It would be almost 100 years after they passed before the first settlers arrived.  It was now the year 1779 and a French Canadian trapper and trader by the name of Jean Baptiste Point du Sable established the first trading post.  He didn't stay here long and sold off the post in 1800 to another French Canadian named Jean Lalime.  A few years later in 1803, the Americans started pushing west and eventually founded Fort Dearborn.  The fort was established on the south bank of what is now the Chicago River.  The place where this fort once stood can be seen on what is now the corner of Michigan and Wacker.  It is marked off in cement near the bridge keeper's house.

The entire region was isolated from the rest of the country.  There was an Indian trail that cut through this territory leading down to Fort Wayne, which is in Indiana.  The soldiers that arrived here to establish the fort had no idea how rough their lives were going to be.  They simply found a level piece of land and soon began constructing the fort.  About a year later in 1804, John Kinzie arrive and bought the land from Jean Lalime.  He established himself and became self-appointed civilian leader of the new fort.  Soon Kinzie established good communication with the local Potawatomi Indians and even began selling and trading them goods.  Somehow, Lalime and Kinzie's friendship fell apart and they became bitter enemies.  This was possibly due to Kinzie being more successful among the locals.  Eventually, their feud escalated into a terrible fight and Kinzie stabbed Lalime to death.  Kinzie, who was wounded, left the fort, but eventually returned. No charges were ever brought up on this incident.

A few months went by and the outbreak of the War of 1812 brought about the first threat to the fort.  Word made its way to the fort that England had taken Mackinac.  Orders were soon given to evacuate the fort and hand out any of the fort's leftover supplies to the local Indians.  The handing out of the supplies didn't happen quickly and took what seemed days to begin.  Meanwhile, the local Indians started to get restless and encamped outside the fort.  Captain Heald, who was in charge, realized he would have to deal with the Indians if they were going to make it to Fort Wayne.  It was now August 12 and Captain Heald held council with the Indians.  An agreement was made for exchange of the fort's goods and then they would grant safe conduct for the settlers to Fort Wayne.  All this talk about the surrender of the guns and ammunition didn't go over well with the soldiers.  Instead of turning over the supplies, they decided to dump all the ammunition into the nearby well and pour out all of the liquor they had left.  This made the Indians angry.

Another council was called that evening.  The tribal chiefs agreed to leave the settler alone, but they would have to abandon the fort.  Though officers of the fort disagreed, Captain Heald went ahead and offered to surrender the fort.  Throughout the evening and into the night, the settlers packed up their wagons and passed out any ammunition they could carry.  They were going to move out in the morning and make their way to Fort Wayne.  Everyone except the sentries that were posted finished packing and went to bed for a long trip ahead of them.  In the morning the caravan of wagons, soldiers, civilians, women and children began their trip out of the fort.  Soldiers led the way, followed by the wagons.  A group of Miami warriors followed at the rear.  Nobody trusted the Indians and believed the safe conduct passage.

The Potawatomi had provided escort with around 500 Indians.  The Indians led them away from the fort and toward a small range of sand hills.  Thinking that the Indians would meet up with them around the bend, the contingent moved on.  The Indians placed themselves on a slight elevation while the settlers were closer to the shore.  At about what is now 16th and Indiana Avenue, the scouts suddenly stopped.  The Indians turned around and were now charging the settlers.  A warning was yelled back down the line, but it was not in enough time.  Concealed behind the sand ridge were Indians who opened fire on the settlers.  The soldiers formed a battle line and held off as many Indians as they could.  After a few minutes they were outnumbered and had to give up their horses and wagons.

What had followed after the surrender was plain savagery.  Tomahawks were tossed, killing the fort's officers.  Mrs. Heald took multiple wounds, but was spared her life by a friendly chief.  Now after being cut down to less than half the number of settlers that started out on this journey, the garrison surrendered and was promised safe conduct.  The death toll was at least 40+ lives lost and of the dead civilians, 12 were children.

In this devastating battle, Captain Heald was wounded twice and his wife seven times.  She was even going to be scalped, but was rescued by Chaudonaire, a St. Joseph Indian who knew her.  Chaudonaire had to give up a mule and bottles of whiskey for her ransom.  Captain Heald was not so lucky and was taken prisoner by a local Kankakee Indian.  The Indian saw both Captain Heald and his wife in a horrible state and felt pity, so he released them.  Chaudonaire and a few others then paddled along the coast and made their way to Mackinac.  The British commander there sent the settlers to Detroit and they were exchanged.  John Kinzie and his family also managed to survive.  This was possibly because of the friendship they established with the Indians.  Kinzie would return to the area about a year later.  Things had changed quite a bit and he couldn't get his trading business going again.  He soon found himself working for his competitor, the American Fur Company.

The rest of the survivors from the massacre either died soon after or were taken as slaves and sold to the British.  The British bought them, and then released them. The fort was burned down.  All the victims remained where they fell and just decayed.  It was not until a year later that replacement troops arrived and found the burned down fort and skeletons.  The deceased settlers then were given the proper burial they deserved.  The fort was rebuilt, but in 1836 it was abandoned since Chicago settlement was able to fend for itself.

The haunting of the old fort is said to involve the troops that were killed by the Indians.  This is the area of what is now Wacker and Michigan. The massacre site around 16th and Indiana remained calm until workers who were repairing the street unearthed some human remains. Carbon dating placed these remains back to the early 1800's, possibly victims of the massacre.  Soon after the discovery, people started to see ghostly apparitions fleeing across an open lot on the site.  The reports claimed that people who passed by saw pale figures moving about the area.  Some of these figures have been seen running around in some form of fright. Their mouths are wide open, as if yelling for help, yet nothing is heard.  The apparitions are said to be dressed in early settler clothing and have been seen around the east side of this present day intersection.  This site is currently a parking lot along the railroad tracks by 16th and Indiana.