Members of the American Spectral Society investigated the reportedly haunted location of Whispers Estate in Mitchell, Indiana on May 3, 2014.  The first inexplicable situation occurred when the tour began.  Joey Tito's video camera malfunctioned to the point where no video was being captured, but audio was recorded without issue.  With that said, no video was recorded during the investigation.  The tour lasted a little over an hour, but before it was over, we were teased by the spirits in the house.  As the tour guides brought the team through the house room by room, they were cautious to assure they closed the doors behind them as the tour moved on.  While in one of the rooms on the second floor, a downstairs door slammed inexplicably.  This event excited the team and presented the beginning to what appeared to be a night full of paranormal happenings.  As the tour drew to its end, the team broke into groups and explored the building on their own floor by floor.

While investigating, Joey began taking pictures throughout the house.  In one room in particular, he thought he had captured the local entity named "Big Black" as he noticed dark, wavy black sections appearing in a couple of the photos he had taken.  Upon further examination, it was deemed a shutter malfunction as the shutter was taking a long time to completely open while taking pictures, causing black anomalous shapes to appear in the frame.

Artie Schramm, one of the team members, was spooked by something so badly that he refused to go anywhere in the house alone.  That included the bathroom.  He had to use the bathroom badly, but held it all night until the investigation was over.  This was the first time this has happened during an investigation.  Artie did not share what spooked him so badly, but he has no desire to return to Whispers in the future.

Lisa Krick stated she felt as if something accompanied the team in the waiting room, attributing this to the uneasy feeling the team felt while spending time there.  The light fixture in the servant's living quarters swung violently on its own.  In the doctor's exam room, several cold spots were felt and the bed inexplicably shook.  Footsteps were heard throughout the evening as well as what sounded like doorknobs being manipulated in various rooms.  At one point during the evening Lisa became violently ill, almost to the point of loss of consciousness.

Does this report of events deem this property haunted?  That's for you to decide.  For more information on Whispers Estate, click on the photo above to navigate to their website.  Audio files below are courtesy of Nicole Tito. 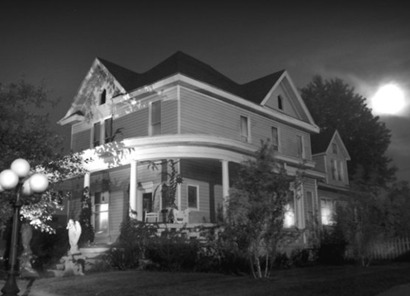