This footage was captured by Joey Tito and was also taken on November 7, 2009 during a private residence investigation held by the Ghost Research Society.  A static camera was placed off to the side of the stage in the theater area of the property.  Pay attention to the center of the screen and watch as the anomaly appears, dissipates and reappears again as it moves toward the ceiling.  This anomaly has been deemed inexplicable as the only source of light present in the area was the IR light from the camera.  Paranormal?  You decide.

This footage was captured by Jim Graczyk on November 7, 2009 during an investigation of a private residence performed by the Ghost Research Society.  Prior to the American Spectral Society's existence, many of its members belonged to the Ghost Research Society, who have been in existence since 1977.  This footage was captured during the early evening hours of the investigation.  Jim set up a static camera in the dining room while he investigated the property with the rest of the team.  Pay particular attention to the window in the top left corner of the frame and you will see what appears to be an anomaly glide past the window from right to left.  This footage was analyzed by members of the GRS, including Dale Kaczmarek, president of the Ghost Research Society.  It was noted that nobody taking part during the investigation was wearing the style of clothing depicted in the video.  The property is gated all around, so the possibility of passerby's walking around the house is highly unlikely if not impossible.  Members of the team paid a visit to the owner with the final report of the investigation.  The footage was shown and a reenactment was attempted, but it was impossible to duplicate as a walking path does not exist in the area the anomaly was captured.  An incredible find to say the least!

Shadow Man at the Lincoln Theater

This photo was taken by Jason Tito at the Haunted Lincoln Theater in October of 2007.  Jason and Joey Tito were walking around the theater taking photos of the property.  Nothing was seen with the naked eye at the time this photo was taken, but while going through the photos taken throughout the weekend, we noticed a figure standing next to the door just to the right of center of this photo.  The figure is completely black from head to toe and standing in a profile pose.  We tried to debunk the photo and duplicate the image on several occasions, but all attempts were unsuccessful.  This photo was sent to friends in the field for opinions, Rosemary Ellen Guiley was one of those friends.  Rosemary has worked in the paranormal field for over 30 years and is considered a leading expert.  She was amazed with the photo and to this day says this is the best photo of a shadow person she has ever seen.  This photo is often used during her presentations on shadow people, djinn and other paranormal topics.

Evidence of the Paranormal? 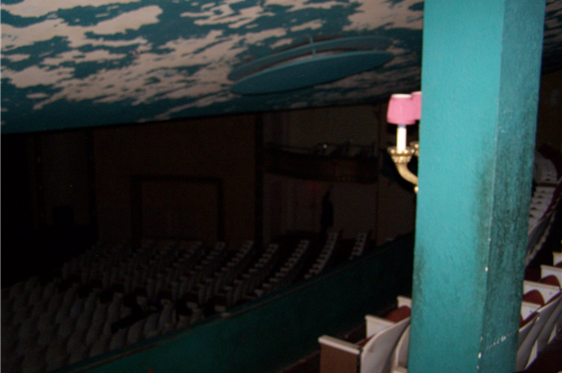