On March 8, 2014, members of the American Spectral Society held a daytime investigation at Ethyl's Party.  This establishment was at one time Coletta's Funeral Home, which began its operation in 1908.  The bar opened its doors in 1995 and is still operated by the Tito brothers.  There have been plenty of ghost stories that have come from this establishment.  A few first hand accounts were shared with the team upon arrival.  The individuals that were interviewed asked to remain nameless, so no names will be mentioned.

One of the patrons shared a story with Joey.  This individual talked about a time when he was preparing food in the kitchen area, located in the back of the building.  He placed a tray of beef on the stove and turned the burners on.  He turned around to grab some utensils when he heard a sound coming from behind him.  When he turned around, he noticed the burners were now in the off position.  This was enough for him to evacuate the kitchen and prepare the food using portable food warmers.  Another patron shared a story  involving some video footage that was captured with a cell phone.  A few friends were having cocktails and sharing some laughs.  They had the bartender dancing to a song that was playing when all of a sudden an orb, or possible ball of light, shot out from under the bar and traveled past the patrons. The team saw this footage and could not debunk this anomaly as being dust, an insect or some form of debris.

​After listening to these stories, the team began to venture around the property.  One of the back rooms was an assembly point.  Joey spoke about this room when he entered.  He shared information about this particular room from when he worked as a bouncer at the bar many years back.  This particular room was where the workers would head to after they closed the bar for the night to count out and disperse the tip money.  Joey said he never felt comfortable in that room and always felt like someone was watching him.  Other members of the team felt off when they spent some time in the room. This room was rumored to be a prep area back when the property was a funeral home.  Could the thought of this room once being used to prep dead bodies create these feelings?

The team then headed to the basement for the next area of investigation.  The basement was also rumored to be another prep area as well as cold storage for bodies awaiting final prep.  The team began shooting video as well as EVP sessions in different areas of the basement.  The concrete slab near the drainage area was the first place Nicole held an EVP session. During this session, shadows began to emerge from the east corner of the basement.  Rob noticed a red light travel from the top of the doorway of the back room to the floor, but unfortunately this anomaly was not recorded on video.  Strange groans and whistles were heard in real time by numerous team members, were these noises coming from spirits who were unhappy about the team invading their territory?  The back room was the next area of the investigation.  This room is currently used as storage, as it most likely was during the time of the building's run as a funeral home.  An EVP session was held in this space as well, during this time other strange moans were heard by all members of the team.

There was definitely a presence felt by all during this investigation.  The team will be back for a followup investigation in the near future.  Additional experiences will be documented and all visual and audio evidence will be posted.

​UPDATE!  Audio clips from this investigation can be found below.  These audio files were recorded by Nicole Tito. 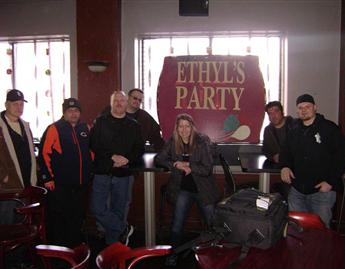